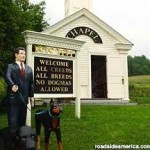 This is such a sad story.  I do not know if the high taxes and inability to pay them had anything to do with Gwen being driven to commit suicide but certain parts of the story indicate that might be the case or part of it.  From what I read it did have something to do with Stephen’s suicide in 2010.  And the taxes seem so high there.  And they seemed to be trying so hard to pay them.  They even had tried to get a tax abatement but were denied.  I do not believe that many of those who conduct the people’s business in running our towns, state and country, try to understand what impact they might have on the lives of hurting people by taxing them.  Such a loss!  Such wonderful people!  Such a wonderful place!  To raise money through taxing is necessary but too much of a good thing can be destructive.  The taxing authority can be political, oppressive, discriminatory and devastating as we are seeing play out each day on the news.  And some things cannot be fixed once broken.  These lives are gone and maybe Dog Mountain might go as well.  Such sad losses!  So unnecessary!