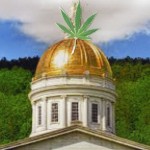 For why H.170 (an act relating to possession and cultivation of marijuana by a person 21 years of age or older) should be rejected.